Thoughts on the RNC

I watched part of the Republican National Convention last night, for the first time ever, I think. I usually skip it as just so much pomp and circumstance. It's probably a sign of the times that I decided to watch: politics are becoming more important to people my age and younger who have never dealt with times like our grandparents went through, and so have dismissed a lot of political rhetoric because it hasn't really touched our lives. I mean, while I was growing up it didn't seem to make much difference whether we had an R or a D in the Oval Office: I still had food and shelter and all my other needs met. Really, until the last five years or so, it hasn't seemed that my daily life was affected by who held any political office. Not so, anymore. Once it hits you in the pocketbook you start to take notice, eh? And once you start to take notice...well, it's almost like a loss of innocence, in a way. Once you know, you can never go back to not knowing.

While I was watching, I was thinking in terms of future presidential nominees. I liked John Kasich (Ohio governor), John Barrasso (Wyoming senator), and Luis Fortuno (Puerto Rico governor). Of course, these were first impressions, but first impressions are important, in my opinion. I'll be paying more attention now to these three. Chris Christie, the New Jersey governor, has been in the spotlight here and there since assuming office, and usually with favorable reviews from vocal Republicans, but my mind isn't made up yet. He tries too hard...or something. There's something about him I don't quite trust yet. The rumor around the interwebs is that he plans to run for president in 2016. Guess we'll see. 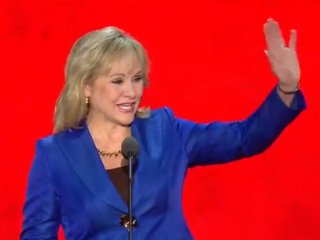 Oklahoma governor Mary Fallin spoke at the convention, but I guess she didn't get air time (at least not on the station I was watching). A co-worker told me he saw a clip of her speech on the news, and she looked/acted like a beauty queen contestant. I can't comment since I didn't see it. I plan to try and find the clip online.

And, could they not find any Republican commentators? I know there's slim pickings in media land, but it seems like they could have found some. I was watching PBS and I thought their anchors were as close to openly antagonistic as they could get without overstepping boundaries. It seemed more like an inquisition than a conversation. Really, PBS? I thought that was in poor taste.


On a different note, has anyone seen the website put out by the Obama campaign, Who is Fighting for Middle Class Tax Cuts? You can input your family's income and see your tax savings and/or increase according to Obama's and Romney's tax plans. Of course, no matter what income level is entered, you have tax savings with Obama's plan and a tax increase with Romney's plan. Let's just pretend for a moment that this is not skewed at all, absolutely no assumptions were made, it's completely unbiased and all facts are known. Umm, so what? We're in debt, people! How can we expect to get out of debt without spending any money? It's sad that many Americans would have made better choices, and wouldn't have put our nation in the crisis we're currently weathering, and now those same people (read: you and I) are going to have to shell out to fix it. But I don't see any other way around it. Do you? It'll definitely help (a really LOT) if we cut wasteful spending, but that won't get rid of the debts we now owe. Just my two cents on the subject.

What are You Doing with Your Cash?

There’s so much advice online, on television and in print media about how to protect your assets from the feared, impending economic collapse. However, disparity reigns. It’s almost impossible to find two sources that agree with each other.


Some financial “experts” will try to tell you they know the safe way to invest your money. Others will say, “Cash is King,” and by that they mean real, in-your-hands cash, not “digital” cash that you have tied up in banks or stocks or bonds. Others say that cash will soon be worthless; you need to invest in precious metals, because gold and silver won’t lose value even if the dollar fails. And still others say that cash will soon be worthless and so will precious metals, because once the monetary system fails, people will be wanting practical items, and gold isn’t good for eating, wearing or building.


So my question for you is, what are you doing right now with your cash? Are you still investing? Are you keeping it in the bank? Or are you stashing it somewhere safe? Are you diversifying? Buying precious metals? Stocking up on supplies and items to barter? Are you of the mindset that cash will be king, or that cash will be toilet paper?  Or, maybe you are looking at it percentage-wise? (i.e., keep 30% of your assets in cash, the rest into other options).


I’m not asking for numbers, of course, and I’d rather you didn’t give any. But just in general terms, how are you protecting your assets?
Posted by Kris at 9:49 AM 14 comments:

And just like that, July is over and August is in full swing. Seems like just yesterday I was freezing and wondering when it would warm up. I might be in the minority here, but I like it hot - just not as hot as last summer when we had 60+ days over 100 degrees. I find it easier to cool down than to warm up. A warm, sunny day makes me happy, especially if it's spent alongside a lake or paddling down a river.

However, the heat and the drought have been working against us here in Oklahoma. Much of the state was on fire over the weekend. I read earlier this week that over 93,000 acres had burned, and there were still some active fires. I think all the fires are out - at the moment, anyway. Originally, arson was suspected in one of the fires (dubbed "the Luther fire" - I think it made national news). Now they're saying they suspect arson in at least four more of the fires. If that’s the case, the arsonists better hope the police catch them and protect them before some good ol’ boys, who lost homes or crops to the flames, find them instead.They might get a notion to take the law into their own hands, and really, who could blame them?

Things have been hectic around here. We've been non-stop busy. Well, at least it feels that way. The hubster and I both caught "the crud," and passed it back and forth for a while. Then the growing season came on, and the garden took up most of my time. We've had some family issues and some job-related issues, and coupled with everyday worries about the economy, etc., we've been pretty stressed out at times.

We have managed to have a little fun. We've gotten to know our next-door neighbors better, and have spent some time fishing and hanging out with them. We also took a cross-country trip, the point of which was to visit my sister and meet my nephews and brother-in-law for the first time. However, we also stopped in Memphis, where we got some kick-ass barbecue and I got to walk on Beale Street for the first time. We got there on a Wednesday, and were happy to find out that every Wednesday is bike night. It was fun to walk around and people-watch and see all the bikes. We also stopped for a night at my dad's house, where I got to see him and my stepmom and my brother. It was a great trip for me, as I don't get to see my family very often.

We had a storm shelter installed this month. We had to choose between a 6- to 8-person unit, or a 10- to 12- person unit. At first, we decided on the smaller unit. But after sleeping on it, we called the company back and upgraded. Now that it's in place, I'm really glad we did. We could get 10 people in it--heck, we could probably get 20 people in it if we had to--but it wouldn't be comfortable. Hopefully we'll never have to use it, and if we do, hopefully we won't be down there for more than a few minutes. We've told four relatives and as many neighbors to come on over if a tornado's headed our way. As far as our pets, the plan is to throw them in the utility room, which has no outside walls, and hope for the best. At any rate, we're both glad to have the shelter.

I've been learning more about my camera, which I bought near the end of last year. It's a nice camera and can do way more than I know how to make it do. I've even attended a couple of meetings for a photography club, and will probably join soon. I like to take pictures; I'm just not that good at it. Yet. But I might start participating in some photography blog hops, just to get some practice in.

Well, that's a long enough synopsis of what I've been up to for the last several months. Hopefully I'll get back into the blogging groove now. I've missed you guys.
Posted by Kris at 7:25 PM 4 comments:

Kris
40-something armchair economist with real concerns about what's going to happen next for the U.S.